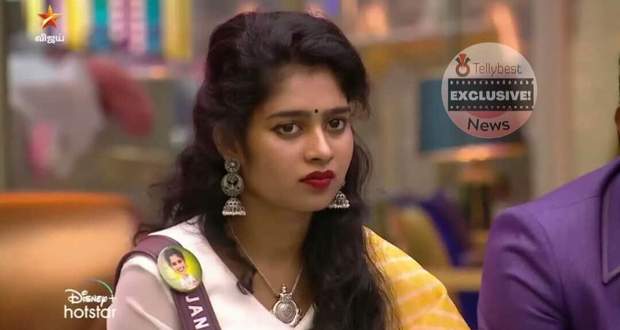 Today's Bigg Boss 6 Tamil 25th October 2022 episode (day 16) starts with Azeem announcing the first task of the week as "Neeyum Bommai naanum bommai"
The contestants are provided with 19 dolls with the names of the housemates written on them. 18 lockers are provided to safeguard the dolls.
The housemate whose name-embedded doll is not placed in the locker will be out of the task.

All the contestants run to the doll box and work furiously to find their doll and place it in the locker.

Manikandan's name-embedded doll is first out of the task which leaves him frustrated. He shouts at all the other housemates and leaves the task.

Consequently, the lockers are sequentially reduced one by one and the housemates move out of the task respectively.

Sherin employs her strategy and eliminates Janany from the task which frustrates her.

Janani gets angry over the action of Sherin and gossips to Dhanalakshmi about her.

Later, Dhanalakshmi tries to eliminate Maheshwari from the task which ends up in an argument.

Dhanalakshmi opens up to Maheshwari that she is playing the task based on personal vengeance which shocks everyone. Azeem tries to solve the issue but in vain.

© Copyright tellybest.com, 2022, 2023. All Rights Reserved. Unauthorized use and/or duplication of any material from tellybest.com without written permission is strictly prohibited.
Cached Saved on: Monday 21st of November 2022 06:16:59 AMCached Disp on: Thursday 1st of December 2022 11:37:19 AM