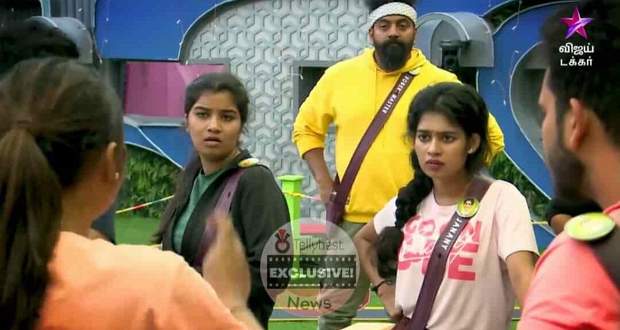 Today's Bigg Boss 6 Tamil 26th October 2022 episode (day 17) starts with a funny chit-chat between Manikandan, Maheshwari and Sherin.
Then the housemates continue playing the "Neeyum Bommai Naanum Bommai" task.
All the participants in the task compete with each other and work furiously to place their dolls.
Aaysha uses her strategy against Dhanalakshmi. She takes the doll with Dhanalkshmi's name and hesitates to place it in the locker.
She states that Dhanalakshmi is one of the strong contestants and is trying to push her out of the task. Dhanalakshmi moves out of the task.
Later, Biggboss announces the new luxury budget task for Manikandan.
The task is that he must eat raw onion in 90 seconds. Manikandan successfully completes the task in the specified time.
The housemates appreciate him and congratulate him.
Then, Biggboss announces the continuation of Doll task 2.0. The housemates push and pull each other during the task.
Some contestants suffer from physical injuries and they struggle to place their dolls in the locker.
Later, the contestants gossip about each other. Azeem and Dhanalakshmi end up in a deep dispute. He accuses her of behaving hardly with others.
Then, Rachitha, Robert, and Maheshwari gossip about Azeem using mind games against the other contestants.

© Copyright tellybest.com, 2022, 2023. All Rights Reserved. Unauthorized use and/or duplication of any material from tellybest.com without written permission is strictly prohibited.
Cached Saved on: Monday 21st of November 2022 06:33:26 PMCached Disp on: Sunday 4th of December 2022 11:17:26 PM