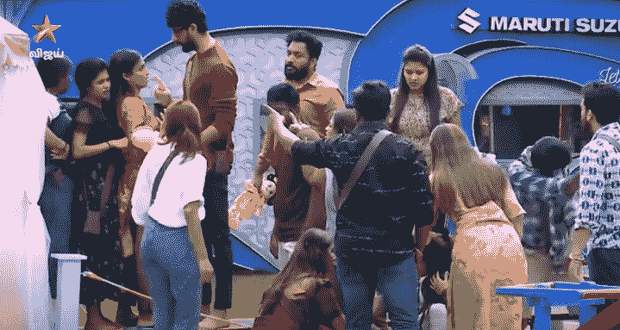 The game gets furious in the ongoing stages. The housemates compete with each other diligently to win the task.

Meanwhile, a more significant dispute breaks in the house during the task as the game gets serious.

The housemates get into physical disputes during the game which causes some injured. Sherin gets injured during the play.

Dhanalakshmi behaves violently during the task and argues with everyone. Her attitude irritates the other contestants.

She throws the doll out from Azeem's locker and behaves violently. Azeem pushes her and places hos doll in the locker.

Amuthavanan fights and argues with Azeem and a huge debate occurs between the contestants.

Robert master, Dhanalakshmi, Amuthavanan, Vikraman, Maheshwari, and Azeem end up in a huge conflict. Azeem insults Amuthavanan and states that he uses the KPY strategy.

Azeem demands an apology from Dhanalakshmi but some contestants support her.

Kathir is found playing the safe game and some contestants point out his behavior. Some gossip about him and states that this will make the game less interesting.

The housemates then return back to their original household chores. They gossip with each other regarding the conflict that occurred during the task.

© Copyright tellybest.com, 2022, 2023. All Rights Reserved. Unauthorized use and/or duplication of any material from tellybest.com without written permission is strictly prohibited.
Cached Saved on: Monday 21st of November 2022 08:06:30 PMCached Disp on: Thursday 1st of December 2022 01:14:18 PM