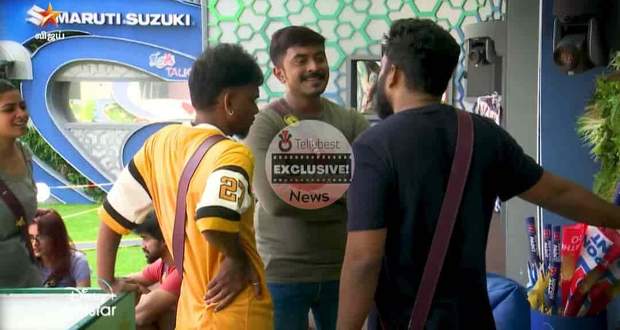 The task "Neeyum Bommai Naanum Bommai" is continued and is expected to reach the final phase. The leftover housemates try to give their best to win the task.

The doll house has six dolls placed in the locker and Bigg boss then announces an open round. The housemates further push each other and play a violent game which further paves way for other arguments in the house.
One locker is empty with two dolls in the game. Azeem has the doll that has Vikraman's name embedded in it. Asal has the doll that has Azeem's doll embedded in it.
Bigg Boss then asks for the final decision of them to place one doll in the locker and finish the round.

But, both Azeem and Asal are strong in their decisions and are not willing to place the dolls in the locker. So, Bigg boss eliminates both Azeem and Vikraman from the game.
Then, the contestants rank each other based on their performances and activities this week. This week's ranking for the performance of the housemates is done. Again a huge argument break between the contestants for positions.
They regard Shivin and Azeem as the least performers and Bigg Boss orders them to go to jail.
Both, Azeem and Shivin move to the jail and they stay there for the allocated time.

Some contestants blame Sherin for making a small issue bigger and support Dhanalakshmi by justifying it was for the purpose of the task.
ADK then does a special performance for Amuthavanan and appreciates him. The other contestants enjoy his activity.
Myna and Aaysha dance to the song sung by ADK. Asal appreciates Amuthavanan for his sense of humor.

The housemates eagerly wait for the weekend episode to meet Ulaganayagan 'Kamal Hassan" to solve various conflicts that occur in the house.

© Copyright tellybest.com, 2022, 2023. All Rights Reserved. Unauthorized use and/or duplication of any material from tellybest.com without written permission is strictly prohibited.
Cached Saved on: Monday 21st of November 2022 06:20:23 AMCached Disp on: Wednesday 7th of December 2022 03:09:16 PM