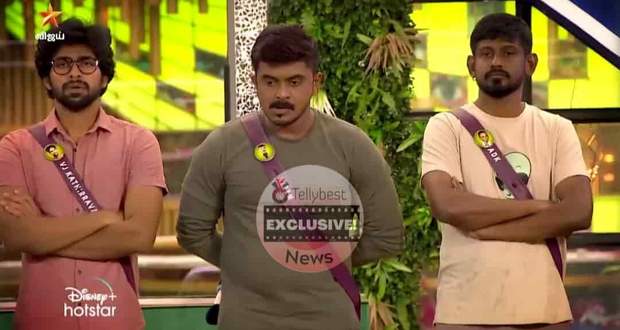 Then, Ulaganayagan Kamal Hassan gives a stunning entry on the sets of BB6.

He enters and delivers a short message to the viewers. He then interacts with the public and asks for their review of the contestants.

The viewers share their insights about the show and suggest Kamal Hassan ask some questions based on the events that occurred during the week.

Later, Kamal Hassan interacts with the housemates and they compliment Kamal Hasan for his attire.

Then, Kamal questions the contestants about the happenings this week.

He deals with the Dhanalakshmi - Sherina issue and talks about that. He addresses both of them about their injuries.

Kamal Hasan questions all the contestants about the issue and asks for a solid eyewitness with who saw Dhanalakshmi pushing Sherina.

Meanwhile, Dhanalakshmi states that she hasn't pushed Sherina and promises to walk out of the show and apologize to everyone if she was proven to push Sherina.

Kamal then investigates who blamed Dhanalakshmi. She reveals the name of Azeem, ADK, Asal, and Maheshwari. Azeem strongly states that he saw Dhanalakshmi pushing Sherina during the task and stand as an eyewitness for the event.

Maheshwari states that she saw Sherina falling down but did not watch Dhanalakshmi pushing. Asal states that he believes Dhanalkshmi pushed Sherina.

He personally investigates and questions them. The contestants put their feedback to Kamal and justify their points.

Then, he opens up to telecast the Kurum Padam which excites everyone including the housemates and audience.

The kurumpadam is played and Dhanalakshmi is proven innocent which makes the contestants who blamed her guilty.

Azeem and ADK apologize to Dhanalakshmi for their mistakes and regret acting so.

Later, Kamal Hasan gives an open statement to Azeem about his strategy and warns him that this is going to affect him personally. Azeem accepts his mistake and apologizes to Kamal.

He states that apologizing is just the first step and what matters is how well he manages to change in his upcoming journey. The words of Kamal were highly appreciated by the housemates, audience and public.

Kamal Hasan listens to the queries and complaints of the housemates against each other and discusses them.

He questions the contestants about each other's activities in the house.

Later, he puts forward some critical tasks to the housemates to make them open in the house and bring everyone out of their comfort zones.

© Copyright tellybest.com, 2022, 2023. All Rights Reserved. Unauthorized use and/or duplication of any material from tellybest.com without written permission is strictly prohibited.
Cached Saved on: Monday 21st of November 2022 12:53:52 AMCached Disp on: Thursday 1st of December 2022 11:33:21 AM