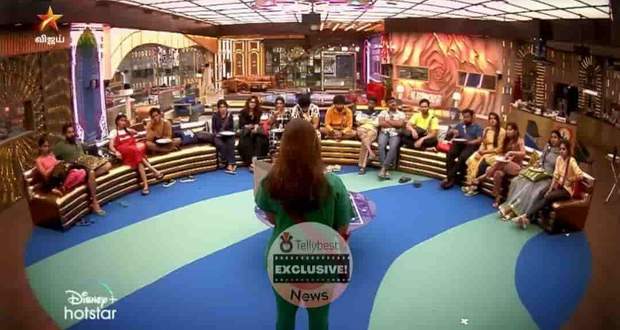 Today's Bigg Boss 6 Tamil 2nd November 2022 episode (day 23) starts with the contestants commencing their day with an energetic dance and Robert master guides the other contestants.

The housemates prepare themselves for the TV channel task. The day starts with the news task.

Dhanalakshmi then becomes the reporter and puts some arrogant words on other contestants which frustrates them.

Azeem and Maheshwari's conflict continues the next day and they both argue with each other over Azeem's statement.

Maheshwari states that Azeem always focuses on criticizing others despite considering their flaws in him which frustrates Azeem.

Bigg Boss gives a task for Dhanalakshmi where the other contestants tell her about the change they make in her.

All the housemates one by one reveal their thoughts to Dhanalakshmi and she makes faces that annoy others.

Vikraman, Rachitha and ADK start to discuss the task. Manikandan and Vikraman end up in a fiery conversation. Maheshwari interferes with the argument and adds fuel to the fire.

Meanwhile, Myna Nandini, Amuthavanan, and ADK get involved in a funny conversation that entertains everyone. All the contestants enjoy the fun made by the three.

© Copyright tellybest.com, 2022, 2023. All Rights Reserved. Unauthorized use and/or duplication of any material from tellybest.com without written permission is strictly prohibited.
Cached Saved on: Monday 21st of November 2022 10:46:27 AMCached Disp on: Thursday 1st of December 2022 03:07:12 AM