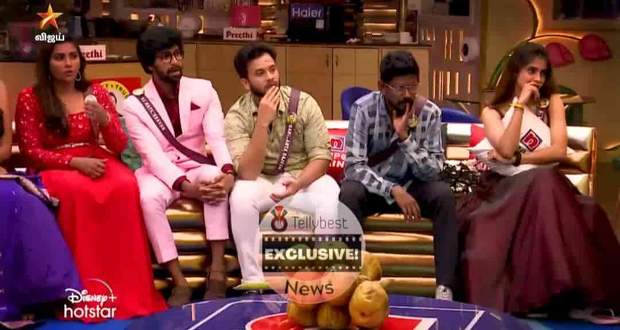 Today's Bigg Boss 6 Tamil 31st October 2022 episode (day 21) starts with the housemates commencing the week with enthusiasm. The contestants split the domestic duties of the Bigg Boss house for the week into different groups.

They nominate others based on their performance the previous week and their activity in the house. Azeem, Aaysha, Kathir, Vikraman and Sherin are on the nominees' list.

Azeem gets nominated by the majority of the contestants. The housemates choose him reasoning his short-tempered and dominating attitude.

The contestants who receive the most minor vote from the public in the nominated list will be evicted from Bigg Boss Tamil 6 the next week.

The housemates split up into two gossip teams. Janany, Amuthavanan, Dhanalakshmi and Robert Master on one side. Maheshwari, Kathir, Ram, Manikandan and Azeem are on the other side. They gossip about each other.

Amuthavanan gets out of the pool and dries himself again. But, the contestants again push him the water and have fun.

Queency, Nivashini and Manikandan compete with each other in the captaincy task. Both Manikandan and Nivashini give their best in the task.

But, Manikandan wins the task and becomes the captain of the week.

The contestants get ready for the Bigg boss announcement for the task of this week. The contestants try to work on the mistakes they were blamed for and change them.

They prepare themselves for the task of the week and try to invest in their best effort to survive in the game for the upcoming weeks.

© Copyright tellybest.com, 2022, 2023. All Rights Reserved. Unauthorized use and/or duplication of any material from tellybest.com without written permission is strictly prohibited.
Cached Saved on: Monday 21st of November 2022 07:08:45 AMCached Disp on: Saturday 10th of December 2022 02:43:06 PM