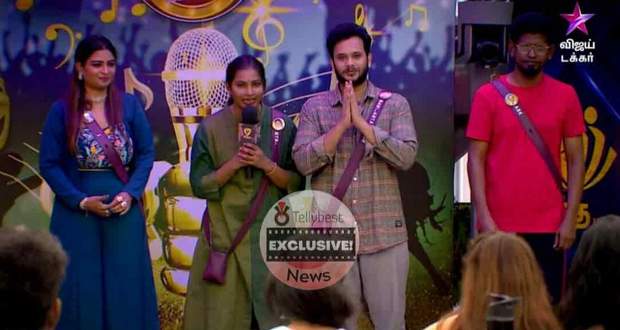 Today's Bigg Boss 6 Tamil 4th November 2022 episode (day 25) starts with a fiery argument that broke in the house between Maheshwari and Azeem. They both argue over the television task.

Azeem comments on Maheshwari's judging and she comments back on his knowledge.

She criticizes him for failing to give a piece of innovative breaking news and argues with him.

Azeem tags Maheshwari by stating that she is zero in judging.

Later, a conflict between Queency and Jannany arises. Queency blames Jannany for using her towel.

January apologizes to Queency by falling on her legs. But, Queency keeps complaining to Maheshwari about the event which frustrates Jannany.

Later, an argument develops between the contestants in Bigg Boss regarding the task that happened this week.

The contestants criticize and argue with each other over the conflicts that happened in the Television task.

Vikraman and Manikandan again restart an issue and indulge in a fiery argument that takes the fight to the following ground.

Then, the contestants choose the worst performer of the week based on their activity in the task.

Azeem picks Maheshwari, ADK chooses Dhanalakshmi, Dhanalakshmi selects Ram and each contestant selects the other based on their performances.

Later, Ram is taken to jail as he receives the highest number of votes from the housemates as the worst performer.