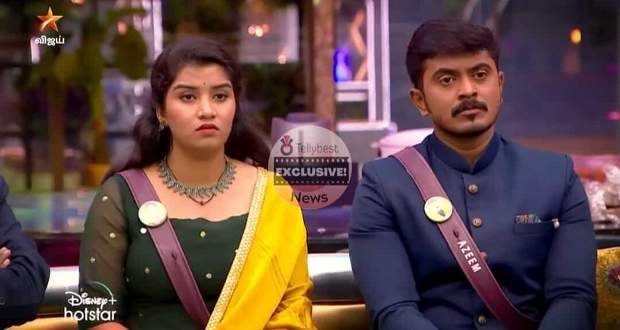 Bigg Boss announces the scratch card task for the housemates. The one who succeeds in the mini-golf will receive a scratch card.

The contestants can follow the instructions given on the scratch card.

Dhanalakshmi wins the mini golf and her scratch card asks her to give free advice to all the other contestants in the house.

She points out Vikraman for not understanding others' points of view and asks him to change that attitude.

Next, she points to Ram and asks him to stop complaining about what other housemates have to tell him.

Shivin gets advice to bring back her original form. Azeem is thrown with advice to think before he talks.

Later, Biggboss requests all the contestants to nominate two other contestants for the elimination process with a valid reason.

Vikraman is nominated by the highest number of housemates as he is negative in the game.

Other than her Ram, Maheshwari, Azeem, Vikraman, Dhanalakshmi, Kathiravan, ADK, Nivashini and Rachitha get nominated by their co-contestants.

The first task of the week is announced by Bigg Boss. Azeem reads the rules of the game.

The Bigg Boss house is divided into two groups of the sweet factory that functions 24x7.

Each group must deliver the order to their customers based on the requirements.

It is the sole responsibility of the group members to protect their products and money from the opposite team.

All the housemates are found enthusiastically making themselves ready for the game.

ADK, Vikraman, Azeem and Ram have a funny conversation with each other. They share their insights about Bigg Boss conversations which end up in a funny manner.