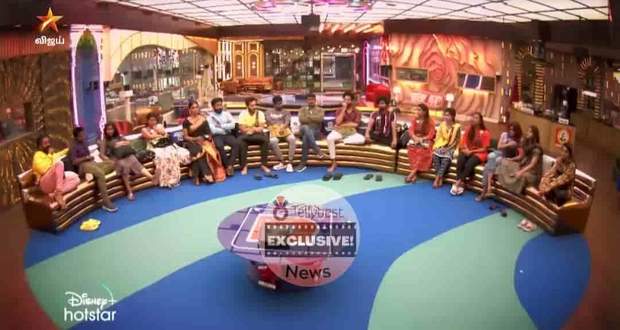 The contestants are divided into two groups and each team gives a unique name for their sweet factory and shop.

Both teams work to make the best sweets from their factories.

Housemates blame and criticize the work of Aaysha and Ram which frustrates them.

ADK states that they haven't presented their sweets in unique shapes and Azeem asks them to have good hospitality.

Aaysha apologizes to all the housemates for her attitude and poor hospitality.

Later, a conflict arises between Vikraman and Amuthavanan.

Amuthavanan complains that Vikraman always points out the mistakes of others but never accepts his own. Rachitha supports his point.

Maheshwari blames Vikraman that he is being influenced by the other team members which directly points Azeem.

Azeem gets frustrated and comes forward to support Vikraman but he accepts that he is being influenced, which hurts Azeem.

Azeem gets angry and informs everyone that he is out of the team and is not interested to be a part of their factory.

Maheshwari then gossips to their team members about the attitude of Azeem and states that she is not responsible for any of the happenings.