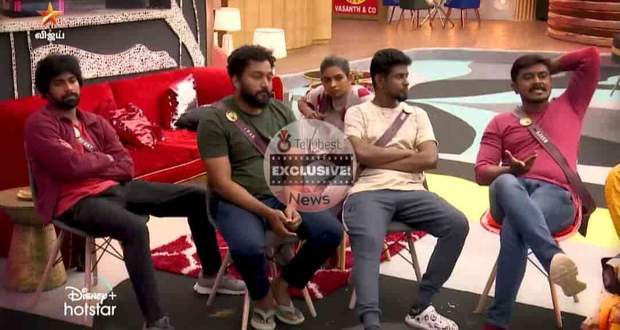 Sweetbox arrives at the Bigg Boss house through the delivery hose.

The housemates fight with each other to take the sweet box from the moving track.

She begins a huge fight in the house and engages in a verbal fight with Manikandan.

The housemates try to settle down the dispute but both of them get into a furious argument.

Dhanalakshmi disrespects Manikandan which further frustrates him and he enters the sweet shop of her team and picks all the sweet boxes.

The dispute gets to the next level while other contestants like Maheshwari, Nivashini and Kathir try to settle this down.

Dhanalakshmi blames Manikandan and pushed her down. But, he says that his aim was just to pull the sweet box from her.

Both engage in another argument over this and both plan to request a replay of the scene in the weekend episode.

Later, a dispute arises in the kitchen over food. Myna and Maheshwari engage in an argument over this.

Myna says that laborers must be served the food they demand. But, Maheshwari in return says that the higher officials are eligible for this.

This breaks out as a new argument in the house. Then, Maheshwari gossips to ADK about the demand.

Meanwhile, Bigg Boss announces a luxury budget task for the week. Each contestant receives a different set of tasks to earn rewards through the task.

All the housemates try to complete their allotted tasks in the given time to obtain the highest amount for the luxury budget.

© Copyright tellybest.com, 2022, 2023. All Rights Reserved. Unauthorized use and/or duplication of any material from tellybest.com without written permission is strictly prohibited.
Cached Saved on: Monday 21st of November 2022 06:11:45 AMCached Disp on: Friday 9th of December 2022 05:25:49 AM