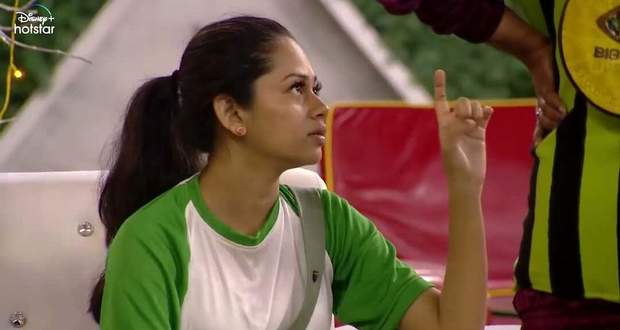 The task is to reveal a contestant's teammate's five biggest positives and negatives in front of all the housemates. All the contestants perform the task one by one, revealing their pair's characters.

Anitha expresses her thoughts about Snehan and Snehan appreciates Anitha for her positive features and also advises her to change some of her negative qualities. Anitha accepts the advice of Sneghan.

Then Bala and Abhirami team is found in the task expressing the positives and negatives of each other.

Thamarai and Suresh Chakravarthy come forward for their task. Suresh expresses his views about Thamarai.

Thamarai gets frustrated by Suresh's comments and argues with him to defend herself. A cold war arises between Thamarai and Suresh. Suresh finally gets out of the task after giving his suggestions.

Sathish and Julie come in for their turn. Sathish expresses his views about Julie in a comical way which is enjoyed by everyone in the BB house. He adds a point about Bala for which he comes in for defense.

Then, Sathish gives a comical counter and makes everyone giggle in the BB Ultimate house.

The last team, Niroop, and Shruthi come and expresses their thoughts about each other.

Ramya then announces the second task of the day as "Vai Raja Vai" where multiple games are present for the contestants to compete. The games include target throw, egg-eating, cup and catch, and more. This game also involves gambling with a golden coin.

All the contestants play well with the motto of obtaining more gold coins. Meanwhile, a big fight arises between Anitha and Bala over the statement Bala spoke. Bala speaks about girls getting the priority in games which hurts Anitha.

Both argue fiercely and all the other housemates get tensed over the fight that is happening between Anitha and Bala.