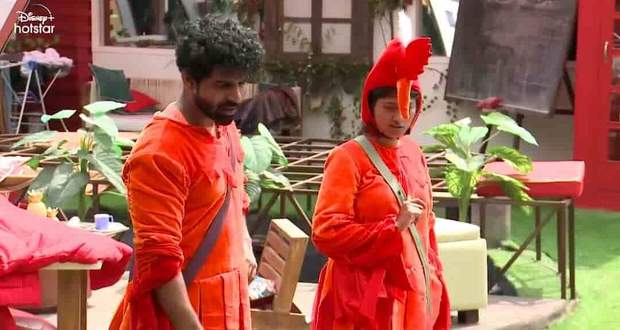 Bala warns Anitha that his game will be more fierce if her attitude towards him remains the same and both end up in a serious argument that panics the other teammates. Julie comes for Bala’s rescue and Abhirami supports Anitha. The conversation develops which puts Abi in tears.

Suresh Chakravarthy being the judge of the game nominates the green team with Ramya Pandian, Niroop, and Sathish as players and as the best team which makes Thamarai of the blue team frustrated and he argues with Suresh who gives an explanation for choosing them.

Then Thamarai goes to Niroop and questions him about excusing Bala in yesterday's game. Niroop tries to give an explanation but Thamarai shouts at him. Niroop gets tense and shouts her back and moves from that place.

Bala is found motivating Julie and advises her about her hard times. He says that as she was undergoing a lot of hardships all these years, this BB Ultimate will help her regain her lost fame. He encourages her by saying that people will recognize her good nature.

The next task is announced by Ramya as "Pravaigal Palavidham 2" where the housemates have to match a bird's characteristics with a contestant and name them with that bird. The game starts and Julie names Thamarai as Turkey, Anitha names Thamarai as Quail, Abhirami, and Sruthi names Suresh as Quail, and Bala pokes Suresh by naming him an Eagle.

Abhirami, Ramya, and Sruthi name Anitha as Woodpecker. Bala names Thamari as Woodpecker and reasons that she repeats the same sentences always. This hurts Thamarai and she emotionally argues with Bala over this.