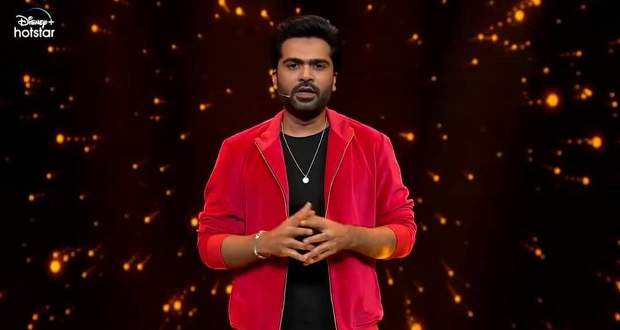 Today's Bigg Boss Ultimate 28th March 2022 episode starts with the stunning entry of the host legendary Silambarasan TR. He enters to monitor the contestants in the weekend episode.

STR starts by giving a short glimpse of the week in BB Ultimate. The past week being a week filled with a different variety of tasks has made the show interesting. The host appreciates the contestants for their wonderful performance in the tasks.

STR announced that the finals of BB ultimate is nearing and this will make a fierce battle among the contestants. He also wishes to question the contestants directly about their attitudes in the house.

Simbu initially congratulated everyone for their stay in the house and their effort in the tasks. He appreciates their improvement in the task. Then he starts questioning all the contestants about the task and their insights.

He questions everyone about the car task and asks the housemates about the clarity of their game. He shoots his question against Niroop which puts him in shock and asks Thamarai about the statement she put forth during the game.

All the housemates stay silent which frustrates Simbu and he says that it is time for direct questions towards housemates than asking questions indirectly. He also adds about the audience's view over the show.