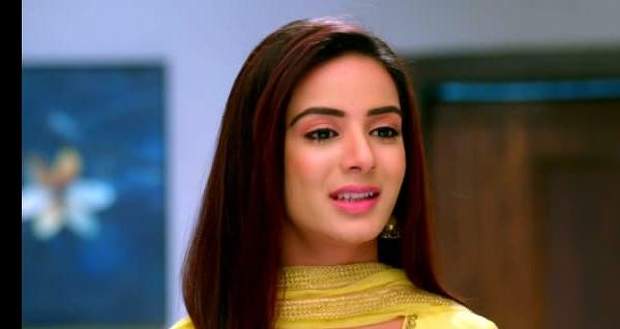 Today's Brahmarakshas 2 13 February 2021 episode starts with Kalindi trying to stop the Granth from burning as it had the secret to destroy the evil Brahma rakshas.

When she does this, her dupatta catches fire. Noticing this, Angad pulls her and leaves the room.

To find an alternative solution to save Robin. She goes in search of Guru Mahamaya and she gets a solution but it is in a riddle format. Later, she solves it and gets to know that she has to sacrifice her life for this.

Robin takes Minty to a Dhaba to have dinner where he sees a girl and feels the urge to eat flesh so he makes an excuse and takes the girl to the jungle.

He starts eating her flesh while Minty witnesses this scene and learns the truth that he is Brahmarakshas.

However, by his black magic, he erases her memory of this scene and returns home normally.

During the Haldi celebration, Kalindi applies Haldi to Minty and Robin but while applying the Haldi to Robin, Angad finds her actions abnormal.

He questions her privately that if she is planning to do anything against Robin in a vigorous tone.

She tells him that today is the day that she is going to destroy the Brahmarakshas which makes him angry amd he points a gun towards her.

Family members come and calm him down after which Shakthi apologizes to Kalindi about his son's behaviour.

Later that night Kalindi and Brahmarakshas discuss and come to a mutual agreement that as per his wish she will surrender herself to him on the night of Rohini Nakshatra.

They both will mate and give birth to the greatest spirit so that he becomes immortal. In return, he will have to leave Robin’s body and not bother their family again. This conversation is heard by Prithvi.

At the mandap during Moharath, they both are missing while Prithvi says that he saw them going towards Jungle.

Angad goes to search for them saying that he has to stop Kalindi.