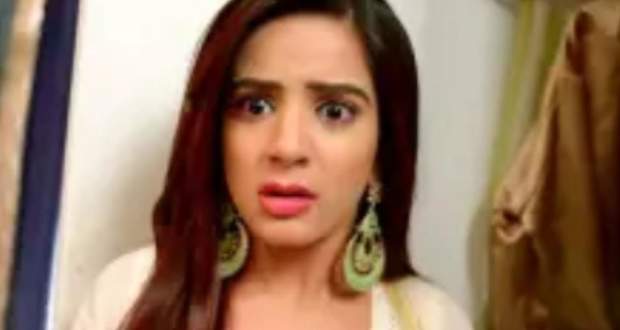 The goons mistake Chandni for Kalindi and kidnap her to ask for money from Robin but he ignores the call.

Later, Chandni’s friend comes to save her from the goons but while escaping they get caught.

Meanwhile, Brahmarakshas appears at the location of the kidnap and chases Chandni but somehow, they manage to get into Kali maa temple and escape from the treat.

In the Kali maa temple guru Mahamaya sees Chandni and gets a vision of Kalindi who is alive.

On the other hand, Robin gets to know that Brahmarakshas is alive in a news channel and suspects that the kidnapers are telling the truth.

Hence Robin reaches the location of goons and sees a photo of Chandni and thinks Kalindi is alive.

Angad attends the ignoration party of Robins's new restaurant and runs into Chandni and mistakes her for Kalindi.

According to Chandni’s plan of stealing the gold from the kali maa temple her first step is to trap Angad so she pretends to be Kalindi.

The police mistake Kalindi as the wiper Chandni and arrests her.

Kalindi defends herself that she is not a wiper and she does not remember anything except the Kali maa mandir of Ambala.

On the other hand, Angad brings Chandni to the restaurant and presents her as Kalindi to Robin.

But Robin does not accept her as Kalindi because he feels her behavior is opposite to Kalindi.

Later the police bring Kalindi to Ambala and force her to remember everything while Brahmarakshas appears.

© Copyright tellybest.com, 2020, 2021. All Rights Reserved. Unauthorized use and/or duplication of any material from tellybest.com without written permission is strictly prohibited.
Cached Saved on: Saturday 16th of October 2021 08:48:21 PM