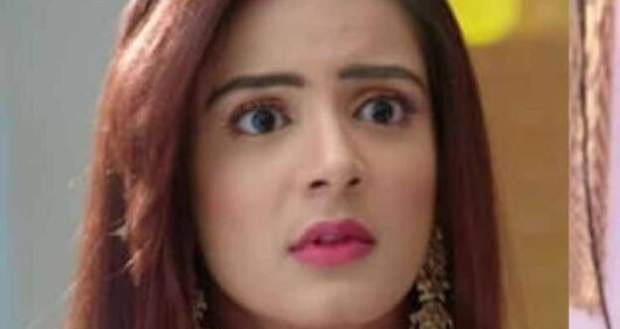 Today's Brahmarakshas 2 6 March 2021 episode starts with Angad calling Robin and informing him that he couldn't find her anywhere.

He goes towards the Dargah and calls out to Kalindi feeling her presence where some men are singing while Kalindi regains consciousness hearing someone calling out to her.

Angad gets a call from Robin who tells him that Kalindi has come home and tells him to return.

He goes away while Kalindi again falls unconscious.

Meanwhile, Irawati is making clay pot but starts dancing to the tune of the song while Mahamaya goes to Kalindi and tells her that she is not safe and tells her to leave through the window.

The song ends and Irawat enters Kalindi's room where Mahamaya is lying down as she lies that Kalindi hit her amd ran away.

Elsewhere, Chandni comes dressed in lehenga towards Angad while he runs away from there ignoring her.

He runs towards the jungle while Kalindi is also running that way.

Suddenly, Brahmarakshas comes in front of Kalindi and she shouts Angad's name before falling unconscious.

Angad hears the shout and calls out to Brahmarakshas while Chandni hides him from Brahmrakshas.

Chandni tells him that Brahmarakshas is trapping him by using that girl and stops him from going in front of Brahmarakshas.

Chandni and Angad leave while Brahmarakshas comes in front of Kalindi as Yug.

He tells her that his sister's mental health is not stable and tells her to come with him.

She takes Angad's name while Yug injects her and makes her faint.

They are going in a car while Yug sees Chandni and Angad asking for a lift.

He covers Kalindi's face and goes out to them while Angad tells Chandni to get a lift from them.

However, Kalindi denies the lift and Yug goes while Kalindi regains consciousness and sees Angad and Chandni from the rearview mirror.

Later, Irawat tells Mahamaya to pierce her thumb with the needle to prove that she is still under his control.

Chandni tries to flirt with Angad in front of everyone while he drags her away and tells her to stay in her limits or he will expose that she is not Kalindi but a thief.

Shalini and Prithvi overhear them and plan to meet Yug.

Chandni plans to have a couples contest with Angad but gets annoyed seeing Angad chef cap.

He says that he is in the mood to cook that day while she offers to help.

Sona stops her saying she doesn't know how to cook while Chandni says thwt she will do something.

He tells her to chop the vegetables while she tells him to teach her and shares a romantic moment with her.

He further makes all the food while she goofs around.

Angwd asks if the ceremony has started while Robin informs that Minty is refusing to come out of her room.

He goes to her while she manages to convince him that they will do everything as Chandni had planned.

They first play the paper dance where Chandni tries to flirt with Angad but he seems distracted.

Angad fakes getting his angle sprained and gets out of the competition.

Elsewhere, a girl thanks Yug for saving her and praises him while he takes her to his cabin and eats her heart after taking Brahmarakshas form.

Prithvi comes to his cabin and bribes him to arrest Chandni while Yug tells him to bring her to him and leave the rest to him.

Prithvi is about to leave while the ring from the girl's hand falls and stips near his feet.

He picks it up while Yug tells him that it is his and makes him leave.