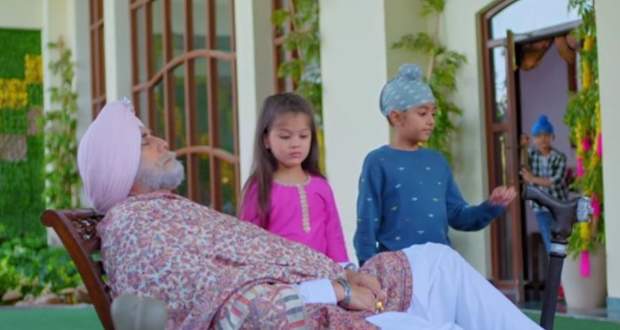 Today's Choti Sardarni 10 June 2021 episode starts with Meher serving food to Daarji and others during the communal meal.

Further, Daarji gets impressed by Meher's cooking skills as the food reminded him about his wife's hands taste.

Later, Karan, Param, and Seher plan to break Daarji's walking stick as they think that he is the devil and all his powers are inside the stick.

Daarji gets extremely furious and demands to hear the truth from the children.

Meanwhile, Karan comes forward and accepts his mistake while Seher and Param also apologize to him for their misconduct.

To everyone's surprise, Daarji feels proud of Karan that he accepted his mistake and said the truth in front of all.

He praises Karan and says that he is the real blood of Gill's family.

Further, Daarji announces that he will punish all three of them the next day at 5 am.

On the other hand, Amrit taunts Meher for scolding Param and says that she is being rude to Param because he is her stepson.

Sarabjeet interrupts the conversation and tells Amrit that Meher loves Param just as any biological mother would love his son.

Later, Amrit asks Harleen about Sarabjeet and Meher's marriage and how did they meet.

Harleen ignores the conversation and tells Amrit that Daarji is calling her.

At the same time, Meher gets worried recalling Daarj's words as he says he can forgive everything but not lies.

Sarabjeet tries to console Meher by saying that they aren't telling any lie but keeping Karan's identity a secret to keep things normal at home.

Afterward, they both think of a plan to fix Daarji's broken walking stick.

Upcoming Chhoti Sardarni episode update: Sarabjeet and Meher come up with a plan to fix the broken walking stick.