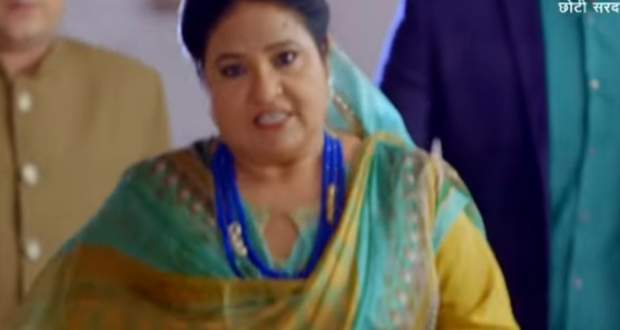 Today's Choti Sardarni 11 August 2021 episode starts with Rajveer telling his sister he wants to go back to Canada but she requests him to stay.

Didaji sends someone to Seher's house as a wedding planner. She tells her to know everything that's going on in that house and inform her.

Anurita, the wedding planner, meets Param. Param introduces her to Karan and Seher.

Didaji tells Anurita to plan the best wedding ever. Seher calls Kunal and asks where has he reached. Didaji listens to this and gets very angry.

In Canada, Kunal faces jam on the road because of some protest against the PM and leaves the cab and goes by road.

Meanwhile, Geetika from the NGO calls Seher to tell her that she has some photos from the event that happened a few days ago.

At the airport, Kunal is stopped by Canadian police as they think Kunal was a part of the protest against the PM.

Kunal tries to explain but the police don't listen to him.

At the NGO, a man tells Seher that the man she is searching for is CM's brother.

Seher drives to the CM's house to meet her brother. Rajveer is painting Seher when he feels Seher is nearby. But Seher comes to know that Kunal has been arrested by the police.

Seher suggests GJ talk to someone in the Indian Embassy. But Seher doesn't get Rajveer's appointment and leaves from there.

Later, Seher talks to Balvinder from the Indian Embassy and she lets Kunal out of the jail as they are Rajveer's friends.

Didaji sends Rajveer to a party on her behalf but Dimpy accidentally puts Seher's note on the gift given by Dida.

Dimpy gives the gift to Rajveer with the wrong note on it. Seher and Kunal are relieved after talking to each other.

Seher tells Kunal to be on time for their engagement. Seher reaches her house and she is shocked to see the police there.