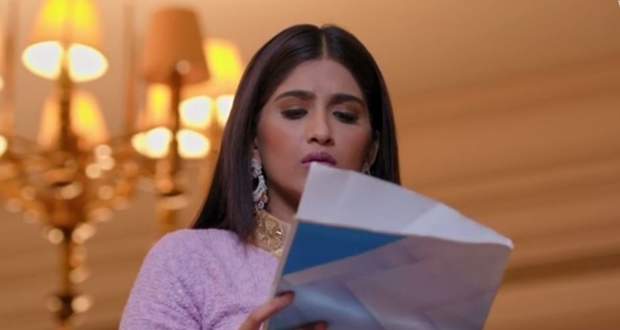 Today's Choti Sardarni 11 June 2021 episode starts with the kids getting scared hearing the sound of the walking stick while it is Meher who comes there with it.

They ask her how she fixed the stick while she reveals that it is of their grandfather Gurbaksh Singh and that he and Daarji had the same one.

Daarji comes there and praises her for holding onto the memories of his brother after which he makes the kids do exercise.

Elsewhere, Meher recalls the past seeing Karan's pregnancy reports while she falls from the stool.

However, Sarab holds her and romances with her while the file flings over the room.

Daiji is about to pick it up but Sarab distracts her while she starts taunting Meher as no one from her family came to greet them.

Later, Daiji chokes on food while Meher hits her from behind to get the food out.

However, she slaps him and starts insulting her while Daarji shouts at her to stop.

He scolds her for misunderstanding Meher while she gets angry and leaves.

© Copyright tellybest.com, 2020, 2021. All Rights Reserved. Unauthorized use and/or duplication of any material from tellybest.com without written permission is strictly prohibited.
Cached Saved on: Tuesday 28th of September 2021 01:44:44 AM