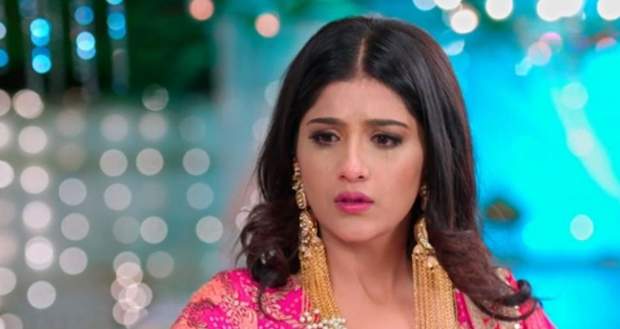 Today's Choti Sardarni 13 March 2021 episode starts with Sarabjeet singing a lullaby for the kids but the kids don't like it and tells him to stop.

They say that they miss Meher while Sarabjeet says that he also misses her.

The kids hearing running hearing Meher's voice but it turns out to be just recorded audio of her that Samaira is playing.

Sarabjeet puts the kids to sleep while Samaira praises Meher's voice for having such an effect on the kids.

Sarabjeet again apologises to Samaira for not reciprocating her feeling while she acts happy in front of him.

She holds her hand and blesses his and Meher's pair and reveals to him that she is leaving the next day.

The next morning, Ginni starts getting vomiting feeling and uses to the bathroom while she collides with Jeeto and the breakfast falls on the ground.

Kulvant gets angry seeing the fallen food while Jeeto and others start saying that Ginni is pregnant.

Meanwhile, Harleen drags Sarabjeet out of the kitchen after tasting his food and tells the chefs to cook food for the kids.

Harleen and the kids tease him for his cooking after which they dance.

Elsewhere, the doctor informs Kulwant's family that Ginni is not pregnant because Rana can never become a father as his count is very low.

Meanwhile, Sarabjeet and the kids spend family time together at the temple while Karan tells Sarabjeet that today is his allocation competition and gets worried.

Sarabjeet asks him what is the topic while Karan says that it's the life story of mother and father.

He tells them the first time he met Seher and their love story after which he drops them off at school and calls Meher.

However, she cuts his calls and turns off the phone which worries Sarabjeet.

Later, he tells Harleen that he needs to go to Delhi to meet Meher while he gets a call from her number and gets shocked hearing something on the call.

Upcoming Choti Sardarni (छोटी सरदारनी) episode update: Sarabjeet gets shocked to see someone at his door.