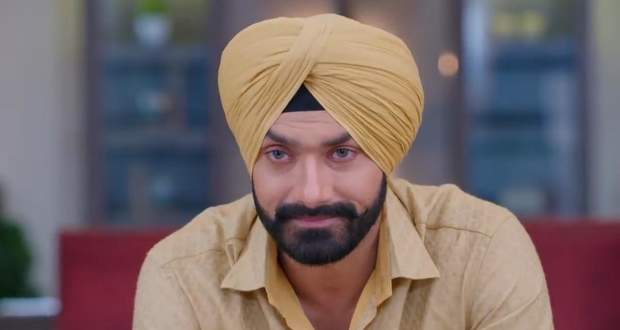 Today's Choti Sardarni 13 May 2021 episode starts with Yuvi hugging Meher but she doesn't recognise him after which Bittu manages to control the situation.

Meanwhile, Rana tries to calm a crying Ginni while Meher sees them and shouts for the whole family.

She says that Rana was flirting with Ginni and the family thrashes him while Meher's memory comes back to present and she leaves for home.

At Gill mansion, everyone acts normal upon her arrival and she goes to freshen up.

Sarab gets an idea and tells the family his plan of making Meher go back to the 2010 year of love and then make her fall in love with him.

Harleen seems hesitant about it but he convinces him. Elsewhere, Kulwant apologises to Jagga and Amrita's picture while Yuvi calms her.

The kids look at the family album and ask her who one person is which causes her to have a headache.

Sarab massages her head while she messages Seher's head and sings.

Harleen asks Sarab why he's sleeping on the sofa and he says that he isn't sure if the Meher waking up will be Meher Kaur or Meher Tillon.

Harleen is about to insult Meher but Sarab stops her when Meher comes there and questions them.

Harleen agrees with Meher's words while Seher addresses her as a teacher.

Upcoming Chhoti Sardarni episode update: Meher to see a picture of her marriage with Sarab.