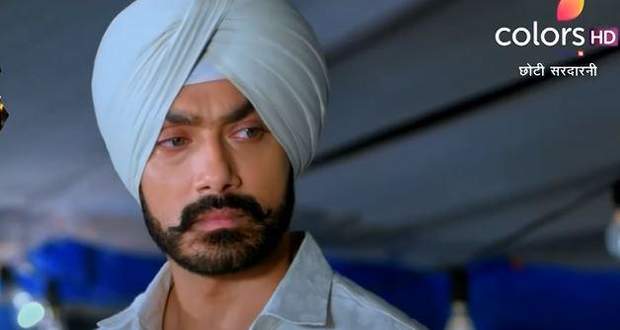 Today's Choti Sardarni 15 July 2021 episode starts with Param leaving for boarding school and missing all moments with Meher. Meher is also heartbroken with his departure.

Sarab tries to cheer Param in the car. Param finds small messages from Meher on his chocolates and misses his mother.

The police show Sarab the video of Meher saving Param by making him hold the stronger branch. Sarab realizes his mistake and shows the video to Param as well.

Param apologises to Meher and they share an emotional moment. Sarb also tries to apologize but Meher is hurt by his words.

Daarji is upset with silence and problems in the house when Param arrives along with Meher.

Param shows his love for Meher and shows Daarji the video. All three kids hug Meher while Meher is upset with Sarab.

Daarji points Sarab’s mistake while Sarab decides to console Meher. Meanwhile, Seher thinks everything will get normal while Meher is upset with Sarab.

Sarab gets various ideas from Harleen to console Meher.

Upcoming Chhoti Sardarni episode update: Sarab locks himself and Meher in a room.

© Copyright tellybest.com, 2020, 2021. All Rights Reserved. Unauthorized use and/or duplication of any material from tellybest.com without written permission is strictly prohibited.
Cached Saved on: Thursday 27th of January 2022 01:55:16 PM