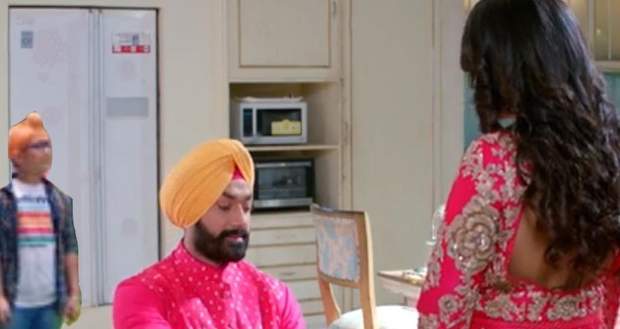 Choti Sardarni 15th May 2021 Written Update: Sarab gets beaten up

Today's Choti Sardarni 15 May 2021 episode starts with Aarab trying to signal that Kulwant that he is Sarab but she thinks that the seller is flirting with her.

Kulwant finally understands his signal and leaves making an excuse.

He takes her measurement while she reminds him to take her waist measure.

She takes a closer look at his face and gets angry realising that the seller is Sarab.

She leaves while Sarab goes after her on a bicycle and her Dupatta gets stuck in the bicycle.

She misunderstands and hits him while other people come there and start hitting him.

Meher falls unconscious while Sarab shows his marriage picture to other people and rushes to Meher.

He takes her to Tillon house where Meher accuses him of being a roadside Romeo.

However, he says that he loves her and leaves saying that he will come in the evening to ask for her hand.

Kulwant and the family try to convince Meher by praising Sarab.