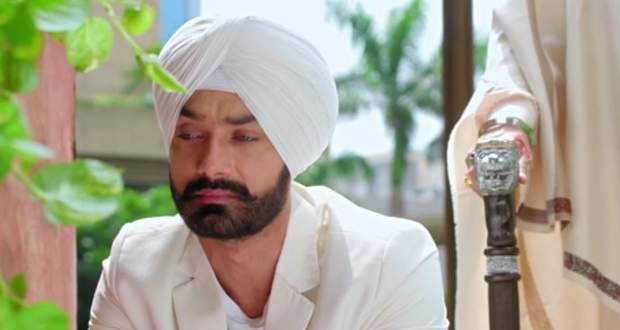 Today's Choti Sardarni 16 June 2021 episode starts with Sarab giving the stick to Daarji and telling him to leave but before that he wants them to show something.

Elsewhere, Meher demands the necklace from Bitto and Rana who swear that they didn't steal it.

Meher goes towards Amrit's room while she orders Harleen to call the police.

Sarab apologizes to Daarji and tells him to forgive him while the kids cry.

Daarji says that his decision is final while Sarab takes him to show the nameplate with his name on it.

He says that the house's renovation happened many times but the nameplate stayed there and it will stay there.

Suddenly, the police come there and Harleen reveals that she called them upon Amrit's orders.

However, Meher finds the necklace in Amrit's room and Seher informs everyone about it.

The police go back while Daarji gets furious at Amrit for trying to frame Meher.

Sarab shows Daarji the judgment report of Meher's case and reveals the truth while Amrit compares her to Lovely. Daarji tells to watch her mouth.

Later, Meher cooks for Daarji while she tells Sarab that they will have to reveal Karan's truth to him somehow.

© Copyright tellybest.com, 2020, 2021. All Rights Reserved. Unauthorized use and/or duplication of any material from tellybest.com without written permission is strictly prohibited.
Cached Saved on: Friday 23rd of July 2021 10:21:42 PM