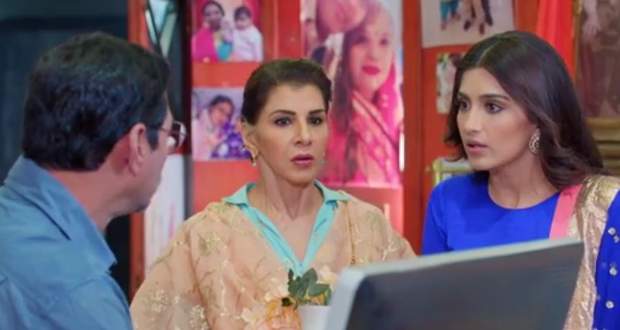 Today's Choti Sardarni 22 May 2021 episode starts with Meher getting a call from crying Karan and talking to him while Kulwant giving the wrong number to the officer on call.

Seher takes the call from Karan and lies to Meher that they were fighting for a hoverboard and cuts the call.

Param comes there and apologies to Karan who accepts the apology and asks what to do about the black eye in front of their parents.

Sarab comes home and Harleen gets worried while the kids come there wearing glasses with the excuse that it is for their performance.

Meher stops the car on road and tells Kulwant that it is the same road where Sarab's accident occurred and goes to the hotel nearby to see the footage.

Meanwhile, Param informs Sarab that he has given all the guests a wrist band as only a limited number of guests are allowed.

She gives her number to the receptionist and leaves for the function.

At the function venue, Kulwant tells Bitto and Rana to help her take the phone from Meher while everyone else dances.

Karen's glasses fall and Meher asks him about the black eye noticing it.