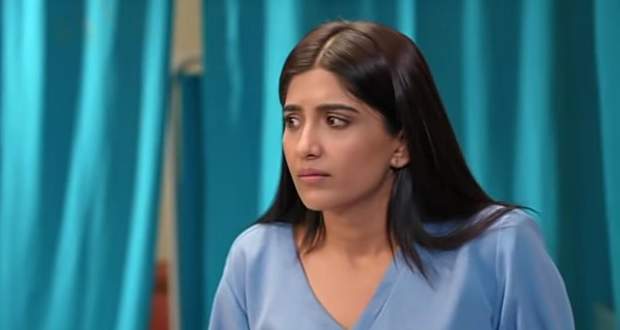 Today's Choti Sardarni 23 April 2021 episode starts with the kids telling Kulwant what happened and going to their room with an upset face.

Sandhya feels bad and cries while Kulwant consoles her.

The doctor tells the nurse that they can't keep Meher for long and will wait till the next day for her to wake up.

Bittu scolds Rana for making a huge loss while Rana request to not reveal it to Kulwant.

Later, the kids come to Sarabjeet and show them dolls while saying that Meher sent those for them.

Meanwhile, Kulwant comes home and reveals to Rana that Bittu is the one who stole their items and tells Rana to bring her the keys to the shop and 5 lakhs the next morning.

She goes with Yuvi while Rana and Bittu fight.

The next morning, Sarabjeet gets upset seeing that no one came to their Paath.

Kulwant tells Bittu and Rana to do the business together.

Sandhya tells Seher that the Paath will happen and tells her to sing the prayer.

She does the prayer while a travellers bus stops in front of the house due to their tire being punctured.

Sarabjeet invites them to the path and Seher gets happy.

Meanwhile, Meher's body starts moving and she wakes up.

Meher wonders where she is and faintly remembers the kids.

The doctors and nurse come there and ask her if she remembers anything while she covers her ears.

© Copyright tellybest.com, 2020, 2021. All Rights Reserved. Unauthorized use and/or duplication of any material from tellybest.com without written permission is strictly prohibited.
Cached Saved on: Wednesday 22nd of September 2021 07:02:54 AM