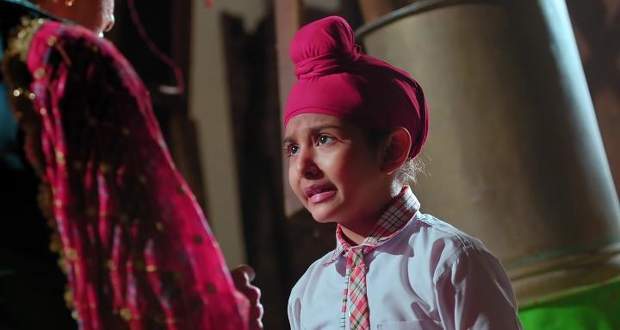 Today's Choti Sardarni 23 June 2021 episode starts with Amrit announcing loud enough for Meher to hear that she is not going to participate in the function today.

Meanwhile, Bitto and Rana tell Karan that Sarab refused to give them ransom saying that he is not his son.

Karan cries and tells them to call Kulwant who later comes there and gives money to Bitto and Rana.

Amrit's friend challenges Amrit and Meher to participate in the function and they both agree.

Karan asks Kulwant why he is not Sarab's son and she reveals that she is not Karan's son.

Sarab calls the driver and finds out that Karan is missing while Karan comes there suddenly and lies that he was in the garden.

Amrit challenges Meher and goes in the round with her while planning to purposefully push her towards the hot oil.

She lets go of Meher's hand and she is about to fall into the hot oil but Sarab saves her.

Amrit blames Meher while Sarab reveals that the truth is recorded in the camera.

Amrit insults Meher in front of everyone while Daarji calls everyone for dinner.

Sarab tries to talk to Karan but he stays upset.

© Copyright tellybest.com, 2020, 2021. All Rights Reserved. Unauthorized use and/or duplication of any material from tellybest.com without written permission is strictly prohibited.
Cached Saved on: Monday 17th of January 2022 10:01:04 PM