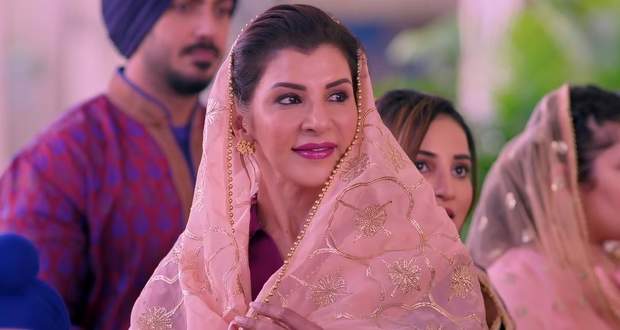 Today's Choti Sardarni 24 April 2021 episode starts with Sarabjeet, Sandhya and others serving Langar to the guests while Kulwant looks at them.

The guest addresses Sandhya as Sarabjeet's wife and compliments them while Kulwant goes to Meher's picture and talks to it.

Elsewhere, the nurse tells Meher to remember her family and tells her that she will be in danger.

A doctor comes there and gives her medicine.

Later, Meher wakes up and consoles a little girl on the bed beside her.

Harleen sees Kulwant tense and talks to her while she proposes to get Sarabjeet and Sandhya married for the kid's sake.

Some people requests to meet Sarabjeet and tells him that their whole community has resigned due to Sarabjeet's shameful act.

However, Sandhya comes forward and praises Sarabjeet while recounting all he has done for Punjab.

People apologise to Sarabjeet and go inside for Langar.

Harleen tells Kulwant to talk to Sarabjeet while she talks to Sandhya.

Meanwhile, a team of nurses take away Meher against her will.

The nurse requests the doctor to leave Meher while he reveals that he has already done the deal of her organs.

Kulwant and Harleen tell Sarabjeet and Sandhya that they are thinking of getting them married.

© Copyright tellybest.com, 2020, 2021. All Rights Reserved. Unauthorized use and/or duplication of any material from tellybest.com without written permission is strictly prohibited.
Cached Saved on: Tuesday 8th of June 2021 05:41:23 PMCached Disp on: Wednesday 16th of June 2021 12:23:06 AM