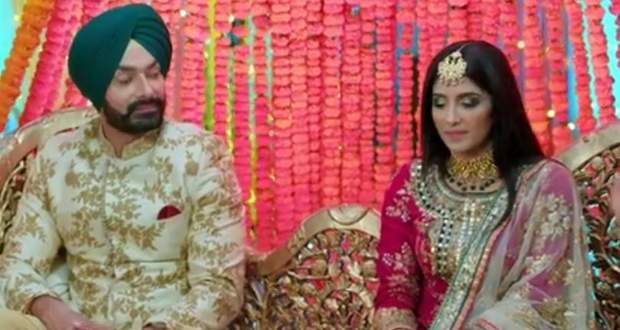 Meanwhile, Kulwant thrashes Bittu and Rana and tells them that they left one of the wristbands at the shop which Meher found.

Meher learns the wristband checking technology which tells her which wristband is theirs and which is not.

Kulwant gives her wristband to Bittu and leaves.

The next morning, Sarab tells Meher to get ready and flirts with her.

He gifts her a necklace and puts it around her neck.

Param calls Yuvi for pictures while Yuvi takes out the same Pendrive in which Rana took the footage and tells him that he has gotten all the picture in a Pendrive and will give it to him later.

Later, Meher checks everyone's wristbands while Param gives her the Pendrive and leaves.

Only Kulwant is left for the screening of the wristband which panics Meher while Sarab comes there and tells her to come inside.

Meher tells her to do the screening and Kulwant's wristband gets accepted into the software making Meher glad.