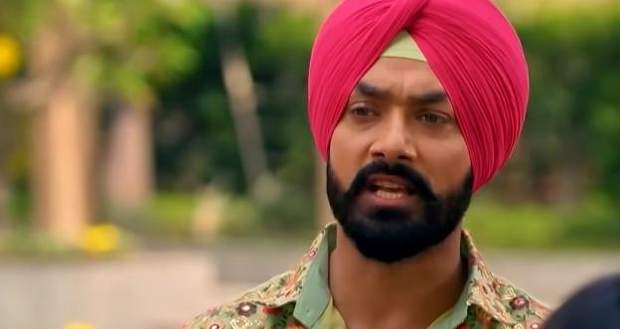 They refuse while Harleen and Kulwant try to convince them for the sake of the kids.

Sarab tells Kulwant that Meher will come back and keeps refusing the idea about marriage.

At the hospital, someone rings the false fire alarm and cuts the electricity while Meher disappears from the operation theatre.

Sarab goes to the kids and tells them that he misses Meher.

The kids bring Sandhya there and request her to talk to Meher and tell her that Sarab is missing her.

Three nurses take Meher to the changing room and hide her there.

They turn up the volume of the television and leave.

Meher regains consciousness and gets emotional seeing Sarabjeet on the television.

She reads the note left by the nurses and exits from the window after changing her clothes.

A man comes to the Gill mansion and Sandhya informs everyone that she called him as he wants to reveal the true story of Meher and Sarabjeet.

The reporter informs him that he has some news too and reveals everything about the reason Meher was kidnapped and the whole truth about Sandhya.

Sarab goes to see the kids and sees that the kids are sleeping while holding Sandhya's dupatta.

He recalls Kulwant's words and tells Harleen to start preparations for the marriage if Sandhya agrees.

© Copyright tellybest.com, 2020, 2021. All Rights Reserved. Unauthorized use and/or duplication of any material from tellybest.com without written permission is strictly prohibited.
Cached Saved on: Sunday 9th of May 2021 04:07:13 AM