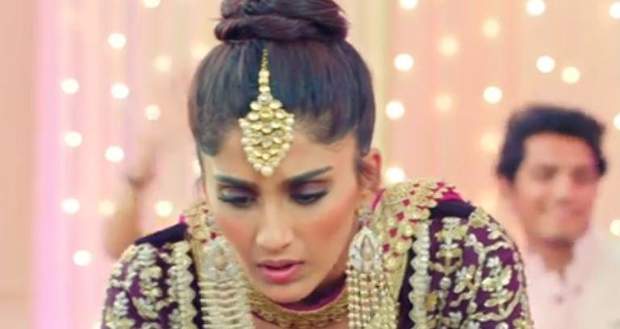 Today's Choti Sardarni 26 May 2021 episode starts with Kulwant consoling Meher and leaving while Meher connects the pen drive into the laptop.

Meanwhile, Dolly tells Karan to tell Param that Meher is his second mother and not first whenever Param fights with him.

Kulwant calls the RTO office in front of Meher while the officer informs them that the number they gave is of a motorcycle and that the truck driver might have pit on fake number plate.

Later, Meher and Sarab make each other wear rings and celebrate the engagement ceremony by dancing.

Meher recounts the bands and tells Kulwant that one person has entered without the band.

Kulwant sees that Meher is about to see Yuvi's bare wrists and breaks the laptop to create a distraction.

She further puts the blame on Karan while Param starts fighting with him.

Karan recalls what Dolly said and repeats it which shocks everyone. Meher and Sarab scold him while Param cries.

© Copyright tellybest.com, 2020, 2021. All Rights Reserved. Unauthorized use and/or duplication of any material from tellybest.com without written permission is strictly prohibited.
Cached Saved on: Monday 17th of January 2022 10:47:20 AM