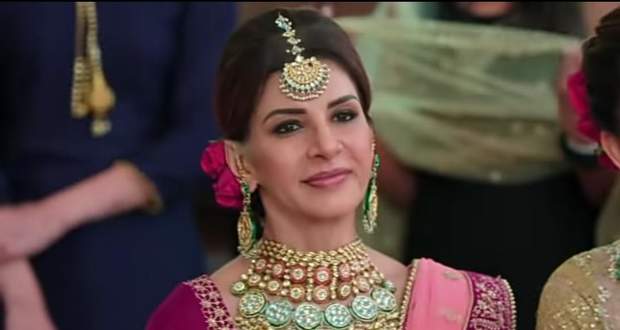 Today's Choti Sardarni 29 April 2021 episode starts with Sarab asking Meher for a kiss and closing his eyes while she leaves.

Rajan comes there with the media and tells them to record Sarabjeet who murdered his wife and married Sandhya.

Suddenly, Meher comes there and slaps him after which Rajan accidentally reveals that he killed her with his own hands.

Inspector arrests him and takes him away.

Meher informs everyone that Sandhya's mother had saved her and that she doesn't remember anything after that.

She cries while Sarab consoles her that she is with them now.

Sarah announces that they should celebrate and Seher says that the person whose name is written on the chit will have to dance with the person who took the chit from the bowl.

They all dance after which Meher gets Kulwant's chit but she ignores it and dances with Harleen.

Kids question her why she didn't dance with Kulwant and she leaves saying that she is tired.

Kulwant remembers how she used to curse Meher and goes home.

Meanwhile, Sarab tells Meher how Kulwant took care of the kids and others in her absence which makes her teary.

© Copyright tellybest.com, 2020, 2021. All Rights Reserved. Unauthorized use and/or duplication of any material from tellybest.com without written permission is strictly prohibited.
Cached Saved on: Tuesday 18th of May 2021 03:36:44 PM