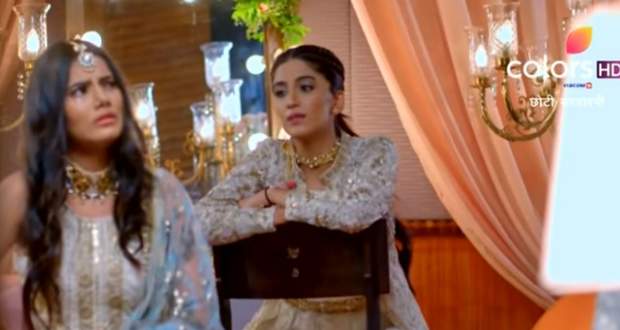 Today's Choti Sardarni 30 July 2021 episode starts with the police coming there and arresting Seher while she tries to plead with them to take her instead.

Seher collects all her money to bail Rajveer out while GJ tries to stop her as it is the studio rent.

The rent lady comes there and demands the rent but Seher gives her the keys to the studio saying she doesn't have rent and leaves.

However, upon reaching the police station, she learns that he has been bailed even before reaching the station.

Elsewhere, Karan and Param fight for a land property while Yuvi comes there and makes a deal with Param.

Dida talks to Nikhil about Seher being the reason for Rajveer's injury and being arrested.

Rajveer takes the phone and disconnects the call after calming her. Seher comes to Rajveer's house to surprise him but gets worried for him seeing his hand still covered in her dupatta.

Karan teases him while Seher asks him for a first aid kit and tends to his wounds. However, she realized that it's about to be 9 pm and rushes out saying that she has to call someone special.

Rajveer gets upset thinking who is this special someone as Nikhil consoles him. Seher talks to her brothers and thinks that they sitting together but gets upset realizing that they are in their rooms.

She scolds them and disconnects the call while Badi Bi scolds the brothers saying how Seher is more mature than both of them.