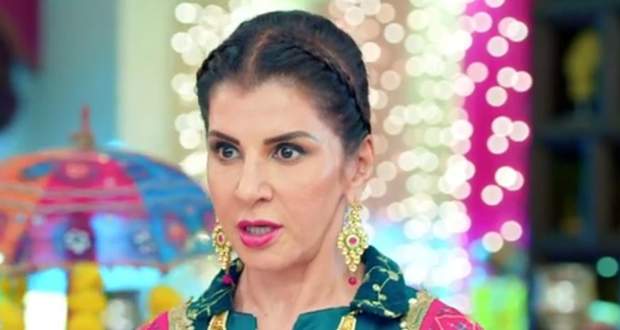 Today's Choti Sardarni 31 May 2021 episode starts with Sarab advising to go to Yuvraj Transports to see if the truck is there while Kulwant recalls burning it.

Kulwant lies that she had a major loss in the business and sold trucks to cover up for it.

Meher and Sarab reach home to see it decorated as a village while the kids reveal that it is for their pre-wedding photoshoot.

They do the photoshoot while Sarab gets a call from the RTO office and finds out the truck's engine number and that the truck might be at Shyamlaal's scrapyard as most of the trucks stolen and sold are found there.

Kulwant overhearS them and thinks to use her evil side to stop them now.

Later, Sarab searches for the truck while Kulwant splashes acid over the engine to remove the number.

Sarab calls Meher and informs her that someone tried to remove the engine number but he managed to find it on the other side of the truck.

Sarab runs after Kulwant and gets shocked to see her face in the mirror.

Sarab sees the records and figures out everything.

Later, Kulwant reaches home while Sarab comes after her.

© Copyright tellybest.com, 2020, 2021. All Rights Reserved. Unauthorized use and/or duplication of any material from tellybest.com without written permission is strictly prohibited.
Cached Saved on: Friday 23rd of July 2021 09:53:02 PM