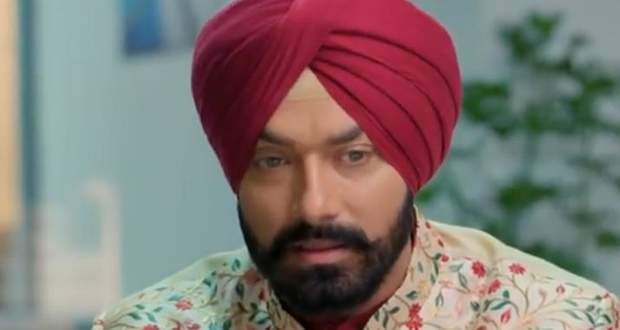 Harleen tries to manipulate children by saying Meher does not love them and won’t come to the house again.

However, children won’t believe in her words.

After a while, Sarabjeet opens his eyes and tells Meher to stay with him.

Samaira holds Sarabjeet’s hands and says Meher has gone and she is not going to interfere in our life again.

Meanwhile, Meher opens the door and comes inside.

Harleen stops her and says her relationship with this house is over so don’t enter this house.

Meher tells Harleen that the love of her husband and children called her back.

But still, Harleen argues with Meher to leave the house.

Meanwhile, the children come and welcome Meher inside the house.

Children feel happy seeing Meher and they hug her while Harleen stands quiet.

As Meher enters she sees the engagement board of Samaira and Sarabjeet. Meher gets shocked.

Meanwhile, Samaira comes and tells Meher that she has seen the love of Sarabjeet to Meher.

Further, she says I am not unhappy because my engagement is broke but because of Sarabjeet's love and leaves.

Then children take Meher to Sarabjeet. Sarabjeet is filled with joy to see Meher.

Meher hugs Sarabjeet and the children.