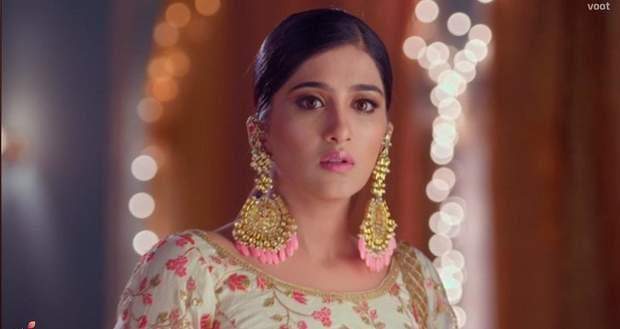 Today's Choti Sardarni 4 March 2021 episode starts with Seher holding Sarab's hand and remembering how she used to imagine her and reveals that she always imagined her father comes to her and hugging her.

However, Meher consoles her and says that he can't tell as he is injured.

Meanwhile, the doctor calls Harleen and tells her that Sarab shouldn't get any stress as he has a head injury and it might affect him in long term.

Later, Seher is sitting while Sarab walks towards her with the help of Meher, Karan and Param. They have q family moment while Harleen comes there and starts scolding the kids for not letting Sarab rest.

Samaira packs her bags and is going saying that she doesn't want to be in between Sarab and Meher as they are made for each other while Harleen cries and manages to make her stay.

Saran reads a couplet for Meher but it's actually Samaira and she tells him that she didn't knew he fired while Meher ways that he flirts all the time.

They talk about the collage days after which Samaira leaves while Sarab and Meher get romantic.

Next morning, Meher wakes up next to Sarab and kisses him while recalling last night.

She goes to check on the kids and gets happy seeing them sleeping together.

Suddenly, Kulwant comes outside with some women and curses Meher.

She tells Meher that she will know what it is when her family dies while Meher warns her to leave.

Kulvant tells her that her husband will due while the other women repeat her.

Harleen comes other and tells Meher that this is all her fault while Kulwant and the ladies chant Param dies, Karan dies, Seher dies, Sarab dies.

Meher bring a fan outside and places powder of spices in front of it which blows into Kulwant and the ladies eyes.

The ladies leave while Kulwant keeps standing there and cursing Meher.

However, Meher holds her clothes and Kulwant leaves.

© Copyright tellybest.com, 2020, 2021. All Rights Reserved. Unauthorized use and/or duplication of any material from tellybest.com without written permission is strictly prohibited.
Cached Saved on: Tuesday 21st of September 2021 04:59:36 AM