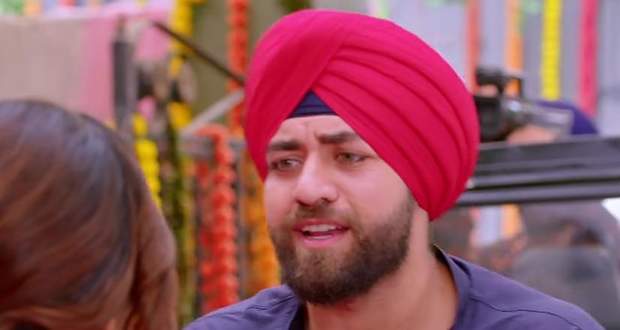 Today's Choti Sardarni 5 December 2021 episode starts with Seher jokingly apologizing to Rajveer and calling him inside.

She goes near him and whispers in his ear that she knows he is trying to get her to hate him and leave him.

He tells her that he is going to trouble her for the next six months while she covers him with a Shawl.

He removes the shawl and tries to argue with her while she takes him inside.

He wets the carpet by putting his soaked shirt on it while Seher tells that he will be beaten by a shoe if he doesn't go to the bathroom next time.

Kulwant and others come there after which he bribes the kids to find out Param's room and announces that he will be staying there.

Param is about to argue but Seher stops him and tells the family that she doesn't want fights every day.

She goes after Rajveer and tells him that she is willing to die but won't leave him because she has an understanding family while he tells her that he will break her family.

She goes to her room and cries holding Rajveer's shirt while Rajveer stands under the shower and thinks to make Seher hate him at any cost.

Kulvant goes to Seher and tells her that Rajveer will break her heart but Seher stays adamant about her decision.

© Copyright tellybest.com, 2020, 2021. All Rights Reserved. Unauthorized use and/or duplication of any material from tellybest.com without written permission is strictly prohibited.
Cached Saved on: Wednesday 19th of January 2022 01:32:32 PM