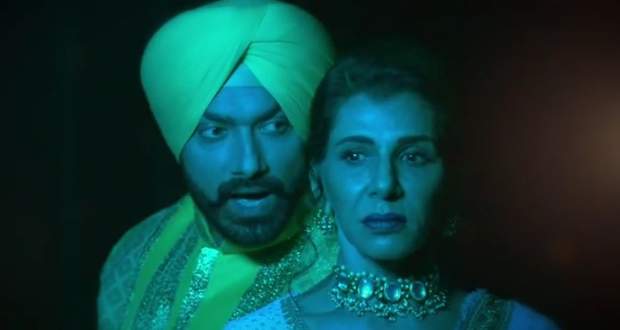 Today's Choti Sardarni 5 June 2021 episode starts with Kulwant and her sons recalling the misdeeds they did while watching Meher and Sarab's play.

Kulwant stops the play by shouting and goes from there while Dolly expresses her displeasure regarding the story of the play.

Meher stops Sarabjeet when he offers to accompany her to check on Kulwant.

Meanwhile, Kulwant starts her car and thinks that the law does not work without any evidence while some crowd stops her car.

Kulwant is elated to know that her name was announced for the next elections and she announces that their symbol is of a truck.

People in the crowd ask Kulwant for a photo of her sitting in the truck. She agrees to them and sits in the truck brought by them while Meher arrived there.

Meher confronts Kulwant for hitting Sarab with her truck while Kulwant tries to calm her.

Kulwant takes Meher to Jagga's photo and tells her that whatever she did was to take revenge for her son's murder.

Kulwant tells her that she had realised her mistake and apologised but Meher does not agree with Kulwant.

Meanwhile, Sarab informs Harleen that he will go if Meher does not come back in sometime.

Mehar is in no mood to listen to Kulwant even after her multiple requests.

Further, Kulwant loses her cool on Meher and tells her that she had no proof against her to get her arrested.  Meher vows to get Kulwant arrested the next day itself while Kulwant plans to win the elections.

Upcoming Chhoti Sardarni episode update: Meher to see the video on the laptop.