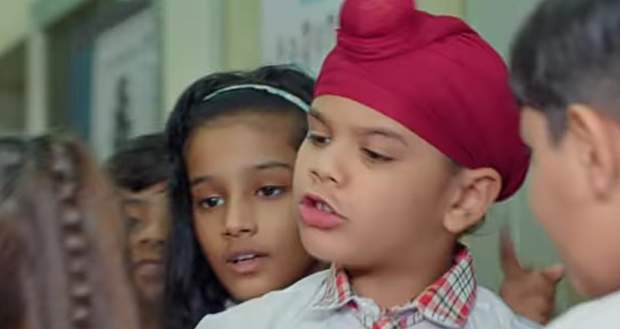 Param and Karan dropping Seher at her class and bidding her goodbye as they go to their classes.

Sarabjeet calls her and informs her that he is decorating Seher's room while he starts getting pain hin is legs but conceals it from Meher.

Meher gets a call from Malini and she tells Sarabjeet that Siddhi's mother is calling her and disconnects the call with him.

Malini tells Meher that Siddhi has been upset sue to the past events after which Meher encourages her and tells her that she will meet her later.

Meanwhile, the students misbehave with Seher and call her duffer after which Seher sits on the teacher's seat.

The teacher comes there and Seher tells her that the students misbehaved with her and the teaches scolds them and tells Seher to sit in front.

Elsewhere, Sarabjeet sees his engagement card and goes to Samaira's room to apologise to her.

Samaira conceals her sadness why joking while Sarabjeet tells her that he is truly sorry.

It is lunchtime at school and Seher is running towards Param and Karan while Yuvi makes her fall.

Some kids hold back Param, Karan and Seher.

Yuvi tells her that her mother killed his father.

Other kids start chanting Murderer while Yuvi writes on Seher's hand that her mother is a murderer.

Seher takes the round from a kids hand and pushes it into Yuvi's leg while he starts shouting as the teacher come.

She tells the teacher that Seher attacked him while Seher goes to the chemistry lab and locks herself inside.

Seher accidentally drops some chemicals causing it to react and produce smoke.

Sarabjeet and Meher reach the school and plead with Seher to open the door but she denies after which Sarabjeet breaks the door and brings her out.

They ask her why she locked herself while Seher reveals that Yuvi pushed her and shows them what he wrote in her arm which shocks both of them.