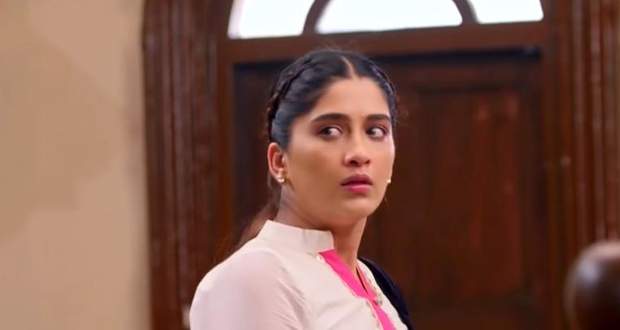 Today's Choti Sardarni 6 December 2021 episode starts with Rajveer destroying the bathroom and comes outside to see that his room is empty without any furniture.

Seher comes there and tells him that she did it over which they both bicker.

Later, the Gill family is sitting together while Rajveer comes there and tells Seher to prepare a grand dinner as his friends are coming over.

Further, he behaves rudely with Kulwant and leaves while Kulwant tells Seher that she should follow Rajveer's orders.

At night, Rajveer comes to Gill's mansion and tells his friends to destroy whatever they want but gets shocked seeing a prayer going on in the house.

Seher mocks him and makes him sit in the prayer after which Bittu gives him Prasad to distribute which he willy-nilly takes.

Afterward, as Rajveer prays with Seher, she claims that even God can't separate them while he asserts that he will make sure she kicks him out of her house and her life.

Later, Rajveer sees Seher playing with the kids and feels emotional thinking that he will never be able to make her happy.

He sees Seher slipping and rushes to save her but she saves herself.

However, she teases Rajveer seeing his attempt.

© Copyright tellybest.com, 2020, 2021. All Rights Reserved. Unauthorized use and/or duplication of any material from tellybest.com without written permission is strictly prohibited.
Cached Saved on: Wednesday 19th of January 2022 01:49:19 PM