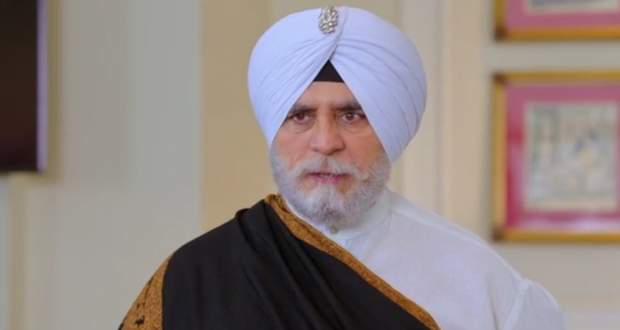 Today's Choti Sardarni 9 June 2021 episode starts with Daarji getting angry with the food while Sarab pulls out a hair from the food.

Sarab defends Meher while Meher offers to make another food.

Everyone tries to console Daarji but he is adamant to leave the house.

The kids are happy that Daarji is leaving while Meher decides to correct her mistake.

Sarab tries to stop Daarji and Daiji while Meher sits in Daarji’s feet and apologises.

Daarji puts forth two conditions to stay. He says that he will not eat anything made by Meher.

He also asks not to make any mistake again.

Meanwhile, Karan and the kids decide to break Daarji’s stick to steal his powers.

Daarji is satisfied with food made by Harleen while Karan and kids steal his stick.

Daarji asks the kids to wake up at 5 am for their test while the kids return his stick.

Daiji is not happy with Meher while Meher is adamant to win Daarji and Daiji’s heart.

Daarji and kids get ready to go to Gurudwara while Daiji taunts about Meher still sleeping.

They reach the Gurudwara and reminisce the old memories.

Daiji taunts again about Meher sleeping while they get shocked to see Meher serving the Prasad.

Daarji thinks Meher has not made the food but someone near him reveals that Meher makes Prasad every Monday.

The people at the Gurudwara praise Meher while Daarji is left in shock.

© Copyright tellybest.com, 2020, 2021. All Rights Reserved. Unauthorized use and/or duplication of any material from tellybest.com without written permission is strictly prohibited.
Cached Saved on: Sunday 2nd of October 2022 02:01:29 AMCached Disp on: Friday 7th of October 2022 03:07:15 PM