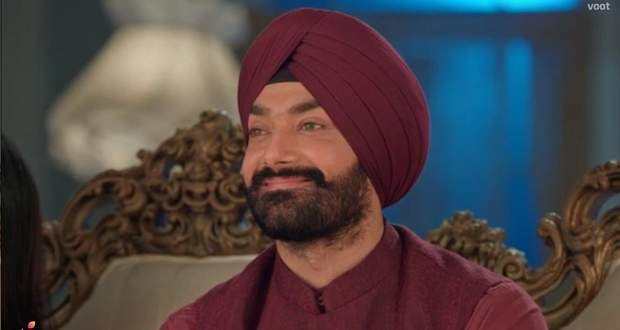 Vikram questions Sarabjeet about his interest in arm wrestling and tries to provoke Sarabjeet to play one match with him.

They both start their arm wrestling match, while Meher encourages Sarabjeet and he wins the match. Sarabjeet asks Vikram to start thinking about his marriage with Aditi.

He asks Vikram to look back and Vikram gets shocked to see his parents at the Gill mansion. Vikram’s parents welcome the priest to fix Vikram’s marriage.

Later, Vikram’s father shocks everyone by telling them that Vikram is not his real son. He continues that Vikram would have married till now but he is not fulfilling his commitment.

Vikram’s father asks the priest to update everyone about Vikram’s marriage dates. The priest informs everyone that if Vikram doesn’t get married in the next three days then the next date will be available after three years only.

Vikram asks them to wait for three years and tells them that it is not easy to get all the arrangements done in three days of time. Meher asks Vikram to talk to Aditi once before taking his decision.

Aditi informs everyone that she is ready to get married in the next three days. Vikram’s father suggests Vikram and Aditi get a court marriage because of the ongoing pandemic.

Sarabjeet interrupts them in between and informs them that Aditi will get married in the Gill mansion. Aditi gets emotional and recalls when her grandfather threw her out of the Gill mansion in her childhood.

Aditi refuses to get married in the Gill mansion and leaves from there. Vikram follows her and questions her about her decision.

He asks Aditi that she doesn’t want to get married in Gill mansion because she is Sarabjeet’s sister Guddi. Aditi gets emotional, while Vikram shows the video of Sarabjeet and Harleen when they talked of giving all the rights to Guddi.

Upcoming Choti Sardarni episode update: Priest informs everyone that Vikram will have two