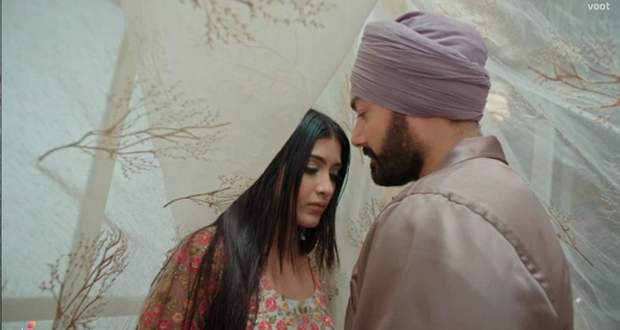 Today's Choti Sardarni 12 Sep episode starts with Vikram and his parents leaving the Gill mansion after fixing Vikram’s marriage with Aditi. Meher asks Aditi to stay at the Gill mansion till her marriage.

The next morning, Kulwant and her sons go for a walk. Kulwant meets a police inspector and he informs Kulwant that CBI officer Vikram has ordered the police force to look for a guy Manav.

Kulwant asks the police inspector to give Manav’s photograph to her so that she could also help them in finding Manav.

Meanwhile, Meher asks Sarabjeet to wake up quickly. Sarabjeet hides behind the curtain in the washroom and hugs Meher from the back. They both grow closer to each other and spend a cute time together.

Param questions Harleen about Aditi getting married at the Gill mansion. Harleen explains to Param that Aditi is Sarabjeet’s sister and a sister always gets married at her brother’s house.

Param rushes to see Meher in her room, while Meher hides behind the curtain so that Param couldn’t see her with Sarabjeet in the washroom.

Later, Kulwant gets an invitation call from Sarabjeet for Vikram and Aditi’s marriage. Kulwant plans to gift something big to Vikram on account of his marriage.

Param asks Meher to give him a sister, while Harleen suggests Meher and Sarabjeet to plan to have a child.

Meher helps Aditi in getting ready for her engagement and praises about Sarabjeet in front of her. Sarabjeet arrives there and overhears Meher complimenting him.

Elsewhere, Vikram shows Manav’s picture to his mother Seema, and tells her that he is looking for that guy Manav. He questions Seema if he has any twin brother.

Seema laughs on Vikram’s question and clarifies him that Vikram is her only son. Vikram’s father Suryapratap asks Vikram to drop the scam case and this makes Vikram get suspicious about something.

© Copyright tellybest.com, 2020, 2021. All Rights Reserved. Unauthorized use and/or duplication of any material from tellybest.com without written permission is strictly prohibited.
Cached Saved on: Saturday 23rd of January 2021 07:24:17 AM