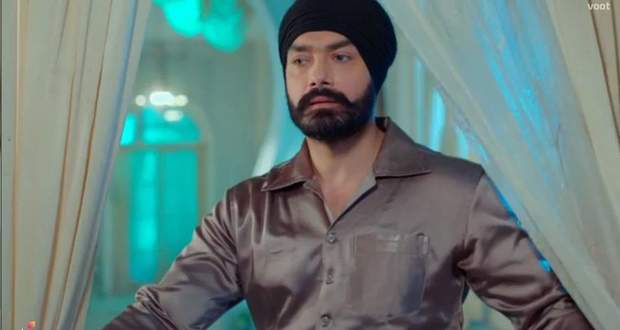 Today's Choti Sardarni 13 Aug episode starts with the police inspector ordering his colleagues to arrange everything systematically as CBI officer Vikram Diwan is going to arrive at their police station.

Kulwant starts acting mentally unstable in front of everyone and this makes Meher get annoyed with her. She tells Amrita that Kulwant’s crime is directly going to affect Sarab’s image.

Elsewhere, Sarab doesn't find Meher in the room and thinks that she might be in the washroom. He gets his file and is surprised to find it already completed and feels happy that Meher supports him in every situation.

Vikram calls a reporter to give some breaking news to release the next morning while the inspector calls Vikram to update him with Kulwant's activities in the police station.

Meher asks the inspector to let her talk to Vikram on the call and apologizes to him for Kulwant’s mistake. She informs him about her mother’s health condition and asks him to cross-check with one of the renowned doctors of the city Ms. Aditi Bedi.

Sarab goes to the washroom door and thanks Meher for being in his life. He gets surprised at finding no one inside the washroom.

Meher reaches home and thanks to God for giving her strength so that she was able to release Kulwant from the police station. Later, Sarab finds Meher praying to God for his well-being and happiness.

Sarab feels grateful to God for giving him a life partner like Meher. He asks Meher to take rest, whereas Meher decides to tell him about Kulwant’s incident the next morning.

Meanwhile, Vikram keeps on recalling Meher’s words when she introduced herself as Sarabjeet’s wife.

© Copyright tellybest.com, 2018 & 2019 & 2020. All Rights Reserved. Unauthorized use and/or duplication of this material without written permission from tellybest.com is strictly prohibited.
Cached Saved on: Thursday 24th of September 2020 03:46:28 AM