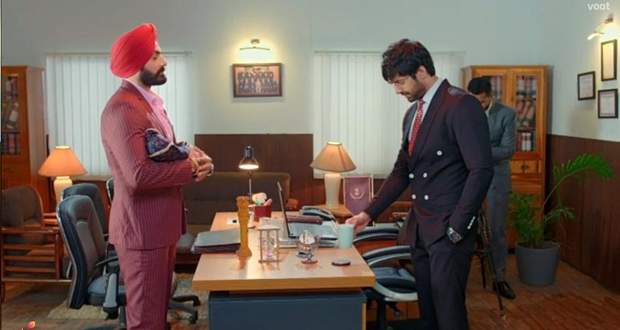 Today's Choti Sardarni 14 Aug episode starts with Aditi coming to Vikram’s place and getting concerned about Vikram after the attack on him. She asks him if he has filed a case against Kulwant or not.

Vikram tells her that he forgave Kulwant as Mrs.Gill convinced him very nicely. Aditi shouts at him as he lost a very good chance to ruin Sarabjeet’s political career.

He questions Aditi about her keen interest in ruining Sarabjeet’s career and reputation. She tells him that she wants to see him winning and is not happy to miss a chance against Sarabjit.

Meher tries to inform Sarab about Kulwant’s last night incident of striking Vikram Diwan. Sarab gets busy in completing his work, whereas Meher helps him in wearing his shirt.

Both of them have a really cute moment together. Meanwhile, Meher again tries to inform him about Kulwant but Sarab gets a call in between.

Meher asks Sarab to take her along with him in the meeting so that she could also help him there. They take Karan with them and do not inform Param about it.

Later, Param makes a call to Meher and tells her that no one loves him and he will not talk to anyone. Sarab gets into Vikram’s cabin along with Karan and is surprised to see the same guy whom he met in the Gurudwara.

Sarab hands over his file to Vikram for inspection, whereas Vikram asks him about his child’s name. Vikram feels a connection and starts smiling when the child holds his finger.