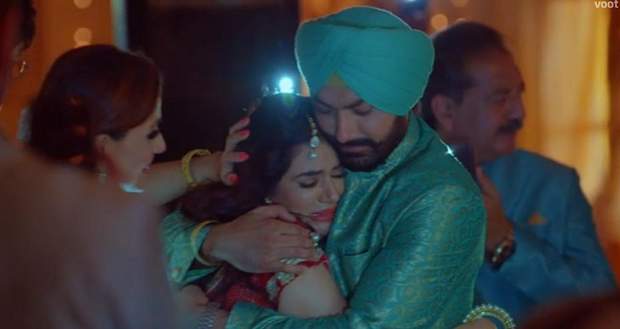 Today's Choti Sardarni 14 Sep episode starts with Vikram’s father calling the CBI office for Vikram’s transfer to any other state. Sarabjeet welcomes Vikram and his family to the Gill mansion.

Kulwant wishes that Vikram leaves Punjab after getting married to Aditi, while she shows Manav’s picture to Vikram and asks him to catch him soon.

Vikram compliments Aditi for looking beautiful and Harleen informs everyone that there is a ritual of distributing things among poor people.

She asks Aditi to touch all the packages kept in front of their grandfather’s picture. Aditi gets emotional on recalling the harsh words of her grandfather.

Aditi starts feeling unwell and Meher asks someone to bring Aditi’s nebulizer. Param goes to Aditi’s room to get her nebulizer from her bag.

Meher finds Guddi’s picture on the floor and thinks that Guddi is present in the Gill mansion. She informs Sarabjeet and Harleen about the same and all of them start looking for Guddi everywhere.

Aditi completes her father’s poem while getting emotional. There is a power cut and all the people turn on their flashlights to see Guddi’s face. Sarabjeet and Harleen get emotionally happy and run to hug Aditi.