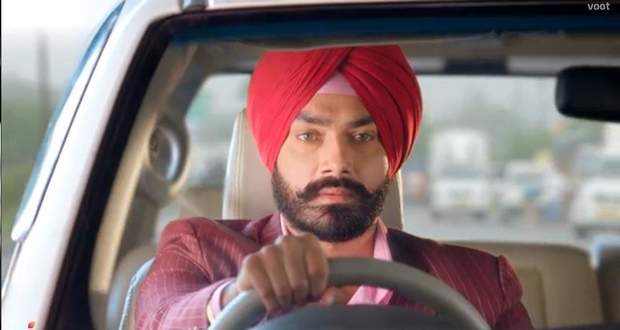 Today's Choti Sardarni 15 Aug episode starts with Vikram playing with Karan and feeling a special connection with him. Sarab asks Meher to take care of Karan and comes back to Vikram’s cabin for the meeting.

Vikram tells Sarab that the inquiry procedure is captured so that the accused doesn’t lie to the judge in the court. He calls his colleague to make sure the anti-corruption squad is ready for an urgent raid.

In the hospital, Kulwant bribes the nurse to bring Paranthas for her, whereas the nurse scolds her for her demand.

Aditi asks the nurse to tie Kulwant with a bed belt. She informs Kulwant’s family members that if they want Kulwant to recover soon then they need to bring Manav.

Amrita gets surprised and asks Aditi that how she knows Manav. Aditi tells her that from day one since Kulwant is admitted into the hospital, she is continuously taking Manav’s name.

Elsewhere, Vikram reveals Kulwant’s incident to Sarab that how she attacked him the previous night. He even tells Sarab that Meher came to the police station to save Kulwant.

Sarab gets a shock on learning about Kulwant’s crime and leaves from there along with Meher. Vikram gets a call from Aditi and tells her that he will make sure to disclose Sarab’s truth and will get him punished for his scam.

Meanwhile, Meher questions Sarab about his continuous silence. Sarab gets angry with her for not telling him about Kulwant’s attack on Vikram.

Meher gets emotional and tells him that she tried to tell him about the incident many times but he was busy with his work. Sarab tries to recall it and apologizes to Meher for shouting at her. Meher asks him to get out of the car and apologize to her while doing sit-ups.