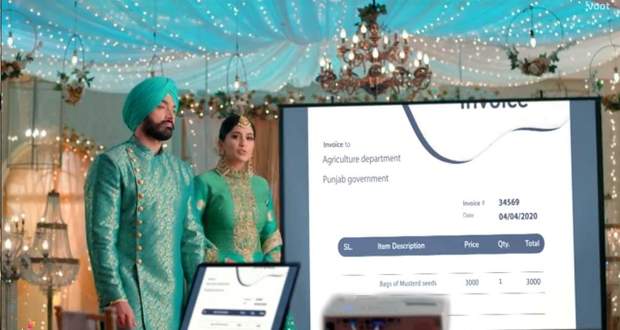 Today's Choti Sardarni 15 Sep episode starts with Aditi getting emotional and hugging Param out of love. Sarabjeet feels grateful to Meher for helping him find Guddi.

Engagement functions begin and Vikram gets a call from his senior officer that he is removed from Sarabjeet’s scam case. Vikram gets angry and claims that Sarabjeet has played a game with him.

Aditi gets emotional and scolds Vikram for giving more importance to his work. She cancels her engagement, while Vikram blames Sarabjeet for everything.

Harleen asks Sarabjeet to use his contacts to stop Vikram’s transfer, while Sarabjeet tells her that it is against his ethics. Meher asks everyone to concentrate on the projector for the next minute.

Meher and Sarabjeet show the basic mistakes of Vikram’s investigation and prove that Sarabjeet is innocent. Sarabjeet tells Vikram that he was about to prove himself innocent after the engagement function.

He asks Vikram to apologize to Aditi for hurting her. Meher tries to make Aditi understand that she should take her final decision wisely.

© Copyright tellybest.com, 2018, 2019, 2020. All Rights Reserved. Unauthorized use and/or duplication of this material without written permission from tellybest.com is strictly prohibited.
Cached Saved on: Tuesday 24th of November 2020 06:41:34 AM