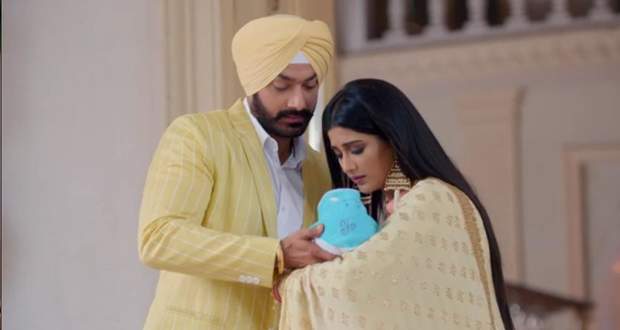 Today's Choti Sardarni 16 Oct episode starts with Sarabjeet and Meher reach their home in India. They get emotional on meeting her children and hug them tightly.

Manav reaches home and his mother scolds him for not calling Aditi even once. She praises Sarabjeet for keeping Meher like a queen.

Seema assures Aditi that Vikram will always love her. She shows Aditi the tiara and tells her that Vikram has brought it for her.

Meanwhile, Harleen witnesses taking care of all the preparations for Meher and Sarabjeet’s wedding anniversary.

Kulwant asks her daughters-in-law to get ready for the party, while they both wait for Bittu and Rana to iron their Sarees.

Meher helps Param in getting ready and Sarabjeet keeps an eye on her from the door. He enters the room to show Meher his handsome look but Meher doesn’t concentrate on him.

He then questions Param about his looks, while Manav waits to see Meher in her favourite coloured tiara.

Aditi comes there wearing that Tiara, and Manav assumes her to be Meher. He tries to avoid Aditi and leaves his room.

Meher teases Sarabjeet and tells him that she doesn’t care for him. She questions Sarabjeet about the thread he wore as the engagement ring.

Sarabjeet answers her that whenever he looks at that thread then feels like she is with him. Later, Meher gets ready for the party and Sarabeet is stunned by her beauty.

He kisses on Meher’s forehead and compliments her for looking beautiful. Meher says she is the luckiest girl in the world for finding a supportive husband like him.

© Copyright tellybest.com, 2018, 2019, 2020. All Rights Reserved. Unauthorized use and/or duplication of this material without written permission from tellybest.com is strictly prohibited.
Cached Saved on: Wednesday 28th of October 2020 01:47:34 PM